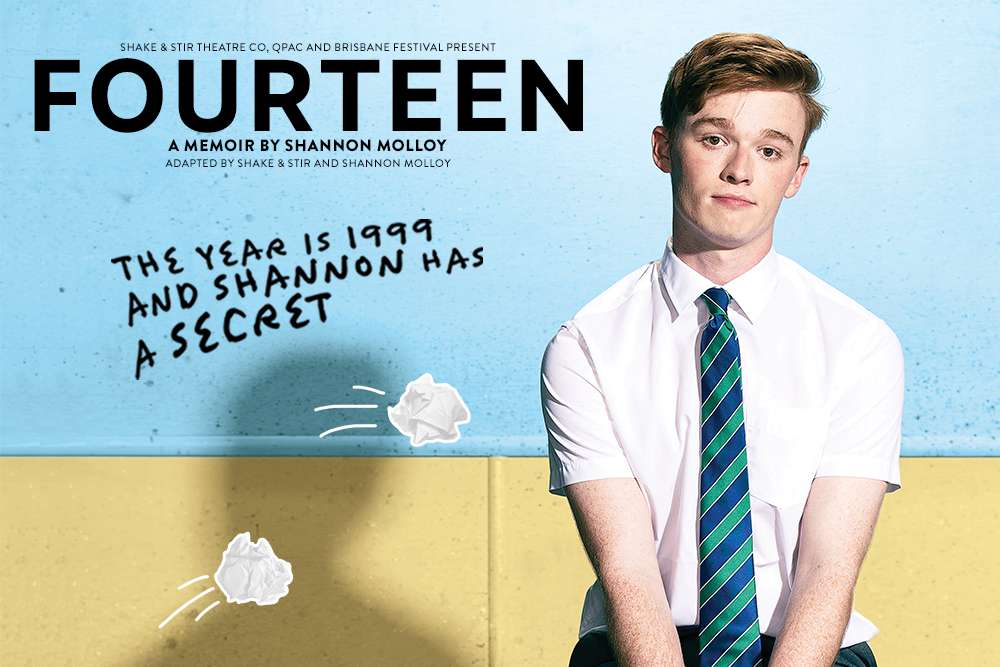 The page-to-stage adaptation of Shannon Molloy’s best-selling memoir by the acclaimed shake & stir makes its world premiere at QPAC’s Cremorne Theatre from 27 August 2022 as part of the Brisbane Festival.

Fourteen is an equal-parts uplifting and heart-wrenching account of Shannon’s experience at an all-boys rugby-mad Catholic school in regional Queensland; the bullying, torment and betrayal as well as the moments of resilience, love and hilarity that punctuated his 14th year.

Artistic Director Ross Balbuziente said Fourteen struck a delicate the balance between trauma and tribulation and the humour and heart that ultimately
triumphed.
“We owe it to Shannon – and anybody else whose experiences mirror his – not to shy away from the more triggering moments and challenging themes but we also want to show the absolute power friendship and family can have on a 14-year-old,” Mr Balbuziente said.
“We’re staying true to the era of Fourteen so that means plenty of ‘90s pop culture references and a mixtape of bangers from Shania Twain to The Spice Girls.”
shake & stir’s co-Artistic Directors Nelle Lee and Nick Skubij worked closely with Mr Molloy to reimagine his memoir for the stage with Mr Skubij directing the production.

Mr Molloy said seeing his story come to life on QPAC’s stage felt surreal but also represented “a dream come true”. “From the moment I started talking to shake & stir, I knew there was no one else I trusted with the task of taking my book and bringing it to theatre audiences. The love,
compassion and enthusiasm the team has shown me will make this one hell of a show that can’t be missed,” he said.
“I can’t wait to see how the darkness and the light, the hurt and the hope – and the camp ‘90s nostalgia – are translated to the stage.”
The Brisbane Festival production marks a homecoming for Brisbane-raised actor Conor Leach (Sequin in a Blue Room, MTC’s SLAP. BANG. KISS.) who plays Shannon in the autobiographical work.

Louise Bezzina said she was delighted to work with shake & stir to bring a fresh voice and a compelling Queensland story to the stage.

“This is a story with so much heart and I know that in the expert hands of Ross, Nelle
and Nick, Fourteen will resonate not only with young people but with audiences who
love exceptional theatre and strong storytelling,” Ms Bezzina said.
“This is a beautiful and poignant story about hope, resilience and overcoming
incredible adversity.”

QPAC Chief Executive John Kotzas said the Centre’s fruitful relationship with a shake & stir had seen the presentation of many new acclaimed page-to-stage works from classic novels such as A Christmas Carol, Animal Farm and Jane Eyre. “This contemporary work is based on Shannon Molloy’s brave and heart-warming story
will no doubt captivate and move audiences as it is adapted and delivered with shake & stir’s trademark story-telling and sensitivity,” Mr Kotzas said.
“The messages within Molloy’s memoir are incredibly relevant today and we know that live performance is a powerful medium for people to experience other
viewpoints, develop empathy and heal. “shake & stir’s first-ever presentation with Brisbane Festival, the world premiere of Fourteen is set to be a highlight of this year’s program and a must-see.” Fourteen is recommended for audiences aged 14+ as it contains strong coarse language, mature themes, simulated violence and depictions of sexual abuse.
Fourteen opens as a world premiere at Brisbane Festival on 27 August 2022 in QPAC’s Cremorne Theatre.

Tickets go on sale on Monday 6 June at qpac.com.au or phone 136-246. Brisbane Festival is an initiative of the Queensland Government and Brisbane City Council.